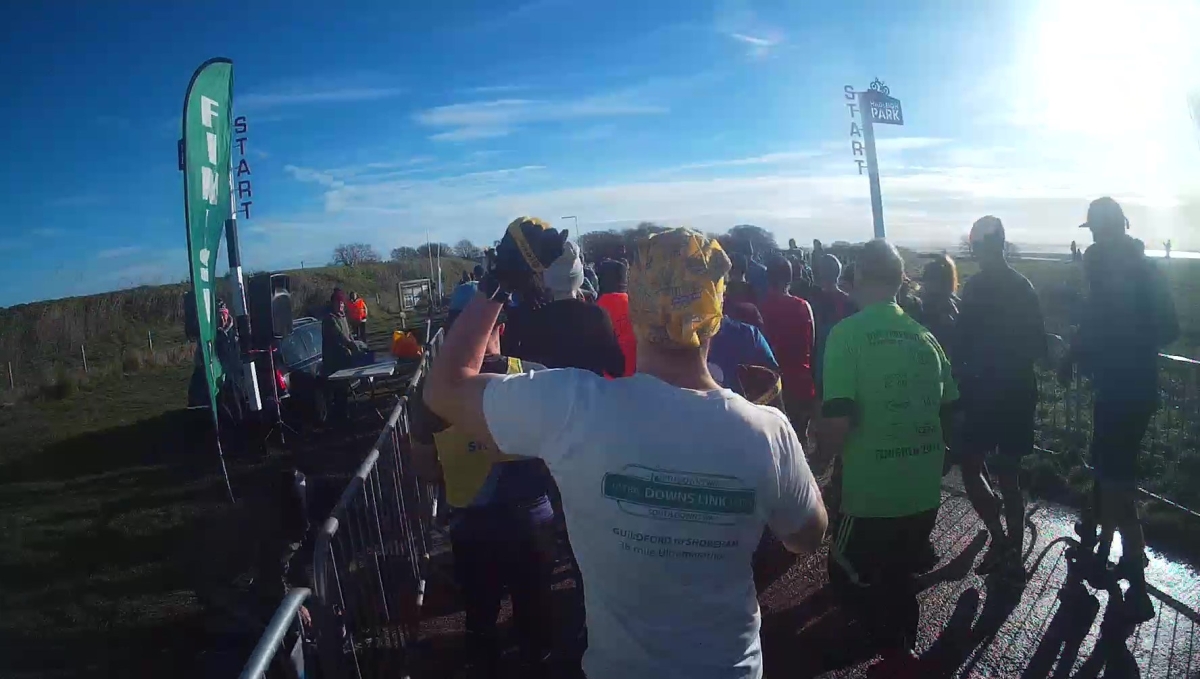 Benfleet. Not a name that makes you immediately think of running, or anything really (sorry Benfleet). So what were we doing early morning on a Sunday, sans coffee and at an isolated and graffitied train station in Essex? Well, this sleepy seaside location is home to a certain prominent mountain bike course featured in the the London 2012 Olympic Games. The race promo from the organisers (Castle Point Joggers) had promised hills, more hills, mud and more mud! How could we resist?!

This race appeared to literally be a steeper challenge than our previous ones in Crystal Palace and Stratford and, being on the coast, it was very windy! The race reception was a quick cab journey away and we hustled into the warmth to queue for food and coffee. Rather than have my usual unhealthy treat after the race, I went with one before…

So pre-race nutrition was going well, but how about training? I’d failed to do much after the Stratford 10k, so was keen to make sure I improved on that record at least. I’d managed to attend a couple of pilates classes in a belated attempt to improve my core strength, which I think was likely behind many of my niggles. With a couple of mid-week runs tacked on, I felt relatively ok.

With the sound of Status Quo’s Rockin’ All Over The World, we started running. The organisers certainly weren’t wrong on the hills. We immediately plunged down a trail that had obviously been frequented by mountain bikes moments earlier and then curved round to go right back up the hill, which was pitted with interesting points of scenery like boulders/ concrete tunnels that I imagine muddy bike tires would make short work of. One thing I did enjoy in-between gasping for air was seeing the crowd trail off in front of me and behind as I progressed along the course.

Making the top of each hill was greeted with a windy applause; probably sarcastic as I definitely walked a fair bit. But these sections were balanced by some fun descents. I had some running battles with a few racers of a similar pace, but by the second lap we were having a good natured joke about the hills. Finally I neared the end and there was just a penultimate weaving hill climb and then a straight run up to the finish line.

At the end my watch read 9.25km, but to be honest I was thankful it wasn’t the full 10k. With over 200 metres of elevation gain, it was truly a challenging course. Probably quite entertaining with a mountain bike as well. I don’t think my enhanced core strength had helped, or my mid-week runs. Back to the training drawing board!

Organisation – 10/10
Well organised with a nearby cafe with junk food for me. Perfect. Brave wardens considering the wind as well.

Race goodies – 4/10
Jaffa cakes were on hand, but I’d had my treat already.

Race route – 6/10
Very challenging and great training for the start of the year. Lots of hills but not that much mud.

Adventure status – 4/10
A seagull looked at me funny at the station.

After the race we grabbed a lift back to the station and opted to wait for our train in a cosy pub instead of the windy station. The Anchor Inn was friendly, warm and had some tasty ales; as well as being 600 years old. Looks like there were at least two interesting things in Benfleet after all.

This site uses Akismet to reduce spam. Learn how your comment data is processed. Jamie and Alex are recreational runners with a history of getting way too deep in taking part in ultra-marathon or other ludicrous endurance events. Follow them as they continue their adventures by signing up to challenges they probably shouldn't have and try to squeeze in enough training to survive.